Hebrew is Good for the Brain
by

Learning a second language has many benefits – it can expose a person to new cultures, new countries, and new ways of thinking. In recent decades there has been overwhelming evidence showing that speaking two languages improves brain function, particularly in childhood and late adulthood. In other words, people who speak two languages have a significant cognitive edge over their monolingual peers.

Dr. Ellen Bialystok, an internationally renowned language and cognition expert at York University and Baycrest in Toronto, has published extensive research on the effect of bilingualism on children’s language and cognitive development. She argues that bilingual children show accelerated mastery of specific cognitive processes.

Dr. Bialystok explains that children who speak two languages develop a mechanism for focusing on each language at a time, paying attention to the language they need when they need it and ignoring the other. This ongoing task of keeping two languages separate requires bilingual children to become adept at controlling their attention. As a result, bilingual children become better at controlling attention in other tasks than monolingual children. Dr. Bialystok explains that “simple attention tasks – ignore the squares on the page or the arrows that are pointing in the wrong direction – very simple perceptual tasks…are performed better by bilingual children and bilingual older adults” than by their monolingual peers.1Ellen Bialystok, phone interview with the author, Toronto, Ontario, January 30, 2013

Bilingual children have an advantage over monolingual children not only in their ability to focus attention, but also in acquiring literacy skills. In a 2005 study, Dr. Bialystok and her colleagues looked at four groups of first grade students: a monolingual group, a group fluent in Hebrew and English, a group fluent in Spanish and English, and a group fluent in Cantonese and English. The researchers found that each group of bilingual students had a better “general understanding of reading…and how forms can be decoded into meaningful language” than their monolingual peers.2Ellen Bialystok, Gigi Luk, and Ernest Kwan, “Bilingualism, Biliteracy, and Learning to Read: Interactions Among Languages and Writing Systems,” Scientific Studies of Reading, Vol.9, No.1 (2005), pp. 43-61. The study also found that the bilingual students whose two languages are written in alphabetic systems (i.e., the Hebrew-English speakers and the Spanish-English speakers) were able to transfer reading strategies across their two languages.

Researchers argue that the brain’s executive function system is wired differently in bilinguals than it is in monolinguals. The executive function system, also sometimes referred to as the executive control network, is a complex network that connects regions at the front part of the brain with other areas, some of them at the back of the brain and some deep down in the subcortex. It is responsible for controlling cognitive processes, such as verbal reasoning, attention, planning, working memory, problem-solving, and task switching. Dr. Bialystok explains:

Using language, for bilinguals, requires more attention and more control than using language for monolinguals. So that executive control network gets connected up to the language systems. The whole brain has rewired that important network. When you go to use that executive control network for other things, non-language things, you’re using a different network, a slightly reconfigured set of connections. The data are telling us it’s a more powerful system.3Bialystok phone interview.

Research on older adults has shown that bilinguals use less energy than monolinguals when they switch from one mental task to another. Dr. Brian Gold, a neuroscientist based at the University of Kentucky at Lexington, recently published a study in the Journal of Neuroscience in which the brains of bilingual older adults and monolingual older adults were imaged while switching between two simple tasks, one that required them to pay attention to colour and one that required them to pay attention to shape. The images recorded which parts of the brains were most active and how much oxygen the brain cells used to complete the tasks. Dr. Gold was able to prove that the brains of the bilingual older adults were more efficient than those of the monolinguals.4Ivan Semeniuk, “Bilingualism Helps Ward off Dementia, Study Shows,” The Globe and Mail, January 9, 2013

Dr. Bialystok’s research into older adults reveals that bilingualism can be significantly beneficial at warding off the symptoms of dementia. Her work has shown that bilingual people “who eventually do become cognitively frail and show up at the memory clinic are, on average, significantly older” than those who are unilingual and closely matched in other respects.5Killian Fox, “Ellen Bialystok: Bilingual Brains are More Healthy,” The Guardian, June 12, 2011. Dr. Bialystok found that dementia occurred four or five years later among people who spent their lives speaking two languages compared to those who spoke only one.

Speaking two languages seems to offer the biggest boost to brain health at the beginning and the end of one’s life. Dr. Bialystok explains that younger adults (in their 20s, 30s, and 40s) tend to have executive control systems that “work pretty well,” no matter how many languages they speak. Neuroimaging shows that bilingual younger adults do have slightly different configurations in their executive system than monolinguals but that these groups seem to perform equally well at cognitive tasks. The biggest differences between bilinguals and monolinguals appear in childhood, when the executive control network is developing, and in late adulthood, when it is in decline.

Most of the research into bilingualism’s effect on brain health looks at people who speak two languages fluently and regularly. But Dr. Bialystok points out that there are cognitive advantages to speaking a second language at any level of proficiency. She argues:

Kids learning a language – whether at school or through an extended family exposure – they’re in some sense not monolingual. There is something that they know that purely monolingual children do not know, even if their ability in this other language is limited.6Bialystok phone interview.

Further research is required to understand the extent to which gaining competence in a second language affects specific cognitive processes and brain development.

Dr. Gold points out that unlike other factors that may contribute to brain health (like genes), learning to speak a second language is something a person can choose. “To the extent that we can identify lifestyle variables that can help us age successfully or gracefully, that’s of high importance both for individual satisfaction and for the health care system,” Dr. Gold recently told The Globe and Mail.7Semeniuk, “Bilingualism Helps Ward off Dementia, Study Shows.”

Lisa Richler is the parent of three Toronto Heschel School students. Formerly a teacher and writer, she is now the school’s Director of Communications and Admissions. 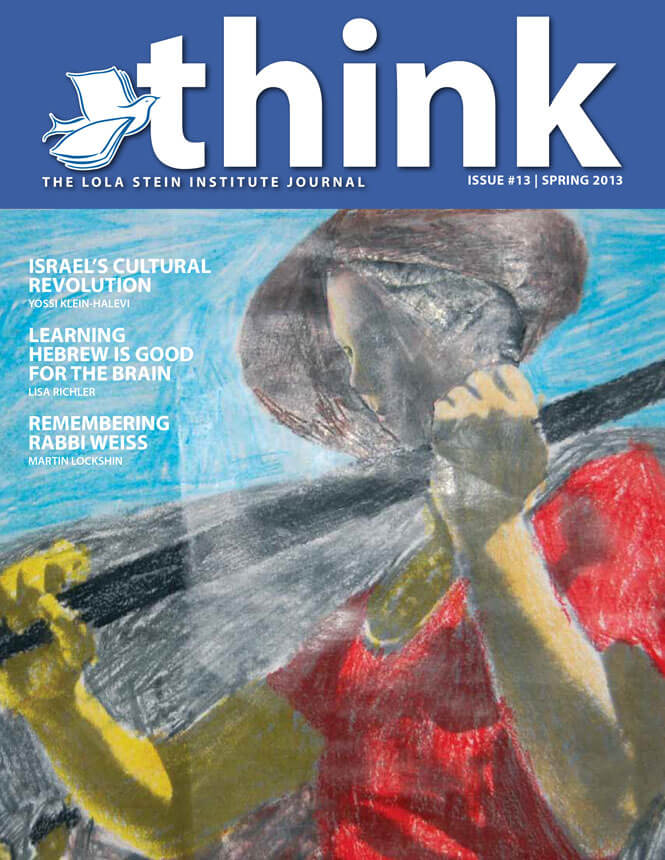 Hebrew is Good for the Brain
Second Language Learning