Where Science and Judaism Meet
by

A colleague once joked that, in a Jewish day school, there are two subjects that are Holy:  Math and Science.  The distinction is that the Holy of Holies is Science.  Meanwhile, the juxtaposition of science and religion in Jewish day schools has potential for controversy.  To avoid it, a mechitzah (a division or separation) is generally placed between the two – and never the twain shall meet.  One is taught in the morning, the other in the afternoon; assign different teachers, each expert in one field and less than so in the other.

Avoiding the complexity of how and where religion and science interact is understandable, but regrettable.  Such sidestepping presents students with false dichotomies between truth and faith; it oversimplifies science, and it diminishes the grandeur of Judaism.  In our work at The Toronto Heschel School, we explore the fertile terrain where science and Judaism not merely coexist but enrich one another.

The first step is to honour both science and Judaism as disciplined ways of encountering the world, not simply as sets of knowledge or sentimentally charged experiences.  Core principles of the scientific approach or “scientific method” involve asking a question, for which a hypothesis is proposed, then tested.  The method evolved over the millennia from Ancient Egypt, Greece, Babylonia, and India, through Islamic philosophy and science to the European Renaissance and the modern age.

Nullius in verba is the motto of the United Kingdom’s academy of natural science, The Royal Society.  It translates from the Latin to mean “not on the word.”  If you want to know the truth, don’t take anyone’s word for it – test it out for yourself.  Sadly, what often passes for science curriculum in schools is the memorization of facts and formula, which is anathema to science itself; masters of the method, such as Aristotle and Galileo, would shake their heads.

At Heschel, we structure science education through the essential elements of the scientific method. From the earliest age, students learn how to observe real life closely and reach meaningful conclusions through experimentation.  We use the world as our laboratory.  They are active scientists, not passive recipients of scientific information.

To study ecosystems, students scrutinize organisms living inside one square metre of our school’s yard; to study animal behaviour, they choose a dog, cat, woodpecker, or squirrel who lives in their home, backyard, or local park and formulate their understanding through patient daily observations.  They learn celestial relations of the sun, earth, and moon by stepping outside their homes at night to chart the movement of the moon; they aggregate their data, and verify or modify their discoveries in light of the evidence.  To study the systems of the human body, students run races, meticulously recording and testing the correlation between their heartbeat and breathing rates.  Prior to looking at diagrams and models that present the conclusions of anatomists, students make and test their own hypotheses about the relationships between the circulatory and respiratory systems.

The scientific method answers questions of “how?”  It looks to causality:  How does vapour rise and form into raindrops?  How does light refract through those drops to make a rainbow?  Science can explain how the sky can appear blue through refracted light and the physiology of the human eye.  It cannot answer the question, “Why is the sky blue?”

Judaism addresses the “why?”  It looks to questions of purpose; questions that are particular to our tradition, such as “Why do we observe the ritual of Passover?” and those that are broader, such as “Why was the world created and what is our place in it?”  Like science, Judaism has a method to answer its questions.  According to Rabbi A.J. Heschel, the Jewish way of thinking is rooted in a sense of awe and wonder.  “Wonder rather than doubt is the root of all knowledge,1” he writes.  It first seems that Heschel is differentiating the Jewish method from the scientific method, which is grounded in “doubt” and skepticism.  However, by emphasizing the value of “wonder,” he signals a critical place where Judaism and science interact.  Science leads us down the path of discovery; wonder gives us a reason to go there, and stops us in our tracks at important moments along the journey.

A number of years ago, when teaching both science and Torah with my Grade 5 students, I noticed that Moshe’s encounter with the burning busy contained many elements of the scientific method.  When he notices a bush burning in the desert, and stops to carefully observe the strange phenomenon, he wonders, “Why is the busy not burned up?” and then tests his observations by watching closely over a period of time.  He makes an analysis and arrives at a conclusion based on what he has seen.

Alongside correlation to the scientific method, two points in the encounter belong to the domain of wonder and religion.  The first is when Moshe turns aside from his daily task of shepherding to contemplate this “great sight.”  Prior even to analysis and investigation is the moment of awe and wonder that captivates.  The Hebrew word nes, poorly translated as “miracle,” really means “a sign” of something wondrous.  The Jewish concept of a created world is a world full of such “signs.”  It awaits human beings, naturally replete with awe and wonder, to contemplate their meaning.

The second “religious” moment comes at the end of the encounter, in the way that Moshe grasps the moral implications of his experience.  The understanding comes to him literally as an “epiphany” – the voice of God – that tells Moshe to lead the people of Israel out of servitude.  Later interpreters clarify that the fire represents the pain of slavery, and the permanence of the busy reveals the endurance of the people in their spirit of freedom (Midrash Shemot Rabbah 2:5).  Moshe begins with awe and wonder, employs the scientific method of observation and analysis, and returns to religion to make a moral decision.  I dubbed this productive integration of science and religion Moshe’s Miraculous Method.

Judaism answers its questions by seeking connections between natural, historical, and sociological conditions to generate moral meaning and action.  Rabbi Lord Jonathan Sacks, author of The Great Partnership: Science, Religion, and the Search for Meaning, puts it this way:  “Science takes things apart to see how they work; religion puts things together to see what they mean.”2  Science helps us understand how an astounding variety of species exists on earth; Judaism helps us make the best choices to act responsibly and morally within the complexity of creation.  A well-developed capacity for awe and wonder heightens our sensitivity to the relationships and connections required for moral reasoning.

Science – and therefore discovery – benefits when students are nurtured in the practices of awe and wonder; trained to gaze thoughtfully at a starry night and to contemplate what lives in the grasses beneath their feet.  Judaism benefits when students understand that critical thinking, asking questions, and experimenting promote moral decision-making and the understanding of human purpose.

Jewish tradition regards Avraham as a great scientist, and it regards monotheism as highly correlated with reason and rationality (Bereshit Rabba 39:1).  When Avraham went out to gaze at the stars in the sky, he recognized in this “great sight” a profound responsibility for future generations.  We owe our children this same capacity for insight, the one that comes when science and Judaism meet on the horizon. 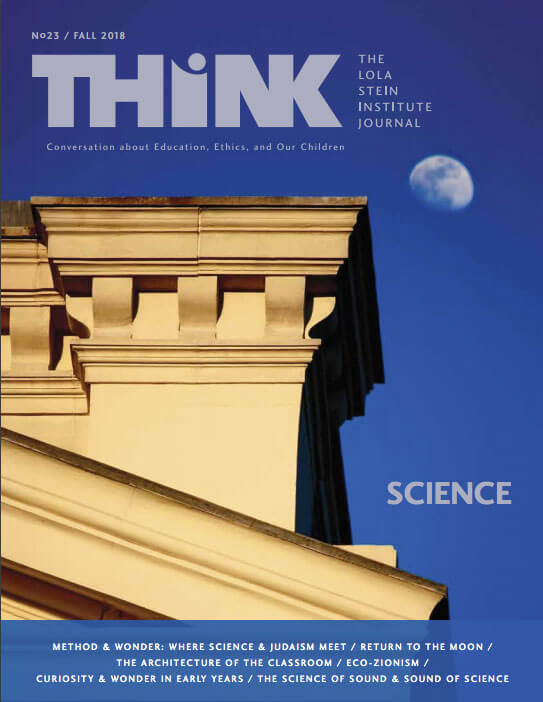