Why Rabbi Abraham Joshua Heschel is Our Inspiration
by

For the past 17 (now 19) years I have had the privilege of being associated with a thoughtful Jewish school.  This school might also be described as dynamic,” “innovative,” “progressive,” “caring,” along with many other positive attributes.  And yet, when it comes down to it, I refer to it as a “thoughtful” school, and this is what I mean:

A “thoughtful” school is one that is intentional and considerate of all aspects of the educational experience of its students.

A thoughtful school is one based on a well-honed educational philosophy which permeates every aspect of the school, from its choice of curriculum and teaching methods, to the design of its classrooms and timetable, to the way it nurtures its community of teachers, parents, and students.

A Jewish school that aspires to be a thoughtful Jewish school roots its approach in Jewish thought and a historical Jewish context.  It draws from the well of these sources to develop well-considered, well-honed, and authentically Jewish educational practices.

The Toronto Heschel School is a thoughtful Jewish school. It sources its educational philosophy in the ideas and life work of Rabbi Abraham Joshua Heschel.

Heschel is best known for combining a deep sense of Jewish spirituality, what he called “awe and wonder,” with respect for the dignity of every person “born in the image of God,” and with civil activism inspired by the prophetic tradition of the Bible. He strongly supported the American Civil Rights movement, and openly opposed the Vietnam War.

Heschel’s relationship and (critical) appreciation of diverse articulations of Judaism – along with his integration of Jewish spirituality and ethical activism made him a unique figure for his time.  It also made him an ideal representative for a school in Toronto that wished to grow itself from a deeply rooted, authentically Jewish, yet modern educational philosophy.

Each aspect of The Toronto Heschel School connects back to the ideas about Judaism and about the purpose of human existence articulated by Heschel.  These ideas were not Heschel’s alone; they are, as he himself would readily agree, rooted in ancient Jewish thought and tradition. Yet, Heschel was an exemplar of a person who lived and taught these ideas in practice, as a modern Jewish citizen.

The school’s pluralistic philosophy emerges from Heschel’s trans-denominational experience and his recognition that each stream of Judaism has something to contribute.  Heschel’s thought echoes the phrase “We were all at Sinai,” the traditional Jewish concept that each Jew was present to hear the revelation of the Torah, and therefore each has something authentic to contribute to understanding, discussing, and fulfilling Torah.

Inspired by this idea, each child at The Toronto Heschel School is recognized as a legitimate contributor to classroom discourse.  Respecting the unique contribution of each child’s questions and comments, classroom seating is arranged in a circle or small groupings; children face one another, and not each other’s backs. These practices of respect for the learner and his/her contributions nurtures students to ask the best questions when they go on field trips, and inspire graduates to ask questions when they sit in high school classes with students from other schools.  These practices make our students recognizable.

Heschel regarded radical amazement – “awe and wonder”- at all of God’s creation to be essential for learning. “Wonder not doubt, is the beginning of knowledge,” he wrote[1].  For the teachers at The Toronto Heschel School, a classroom that inspires wonder is paramount.  For this reason, each classroom is designed with objects, texts, and images that spark curiosity, questions, and discussion.  Teachers are strongly encouraged to display remarkable objects from nature – a beehive, a conch shell, a magnificently curled shofar —  that evoke children’s natural sense of wonder and inspire investigation.  The school’s full commitment to environmental stewardship is grounded on Rabbi Heschel’s deep respect for creation, and his view that the natural world is our “sibling,” co-created with us[2], and deserving of our care and concern.

When The Toronto Heschel School looks to educational research to develop its pedagogical practices, it keeps its Jewishly inspired framework foremost in mind.   When the school founders investigated Howard Gardener’s work on multiple intelligences, they were attracted not simply by its stated pedagogical efficacy but because it reflected Heschel’s respect for each human being as a unique learner.  Likewise, The Toronto Heschel School’s arts-based approach is developed from the recognition that the arts inspire awe and wonder and offer diverse opportunities for the exploration and interpretation – Jewish and universal alike.

Heschel was a rigorous thinker, who demanded the highest standards from himself and his students. He placed tremendous emphasis on study, and stated that “learning is decisive” for the purpose of human living. He regarded learning as “a source of adventure” and “a source of joy,” and yet believed that the highest purpose of learning was to discover “the importance of self-discipline, the realization namely, that a life without self-discipline is not worth living.”[3]

Educators at The Toronto Heschel School have made Heschel’s three purposes for learning the pillars of their educational philosophy – joy, adventure, and self-discipline. These principles apply whether children are learning a text from Torah, engaging in a difficult math question, or learning to pace themselves as they run laps around the school field.

For Heschel, an even higher form of Jewish activity is civic activism; personal dignity, discovered through learning, and other practices of discipline, such as prayer and ritual mitzvot, are the preparation. Heschel’s writings accentuate the prophetic tradition in Judaism which regards redress of inequity and injustice as core teachings of Torah.  Inspired by this vision, The Toronto Heschel School integrates tzedakah projects deeply into its curriculum through programs such as its Jewish civics program, and the graduating class’ human rights speeches. Through a school-wide and year-long program, Weekly Middot (ethical actions), Derekh Eretz (respect for one another other on a daily basis) is woven deeply into its culture.

Not surprisingly, a thoughtful approach to Jewish education attracts teachers who are looking for a higher standard of Jewish teaching and learning.  The Toronto Heschel School is thoughtful not only about how it teaches its students, but also how it trains and develops Jewish educators with ongoing training, mentorship, and collaborative planning. And of course, a thoughtful Jewish school attracts thoughtful Jewish parents, who are also interested in learning for their children’s sake and their own.

This article was originally published in THINK, Issue 14, Fall 2013.

NEXT ARTICLE
A Sustained Vision 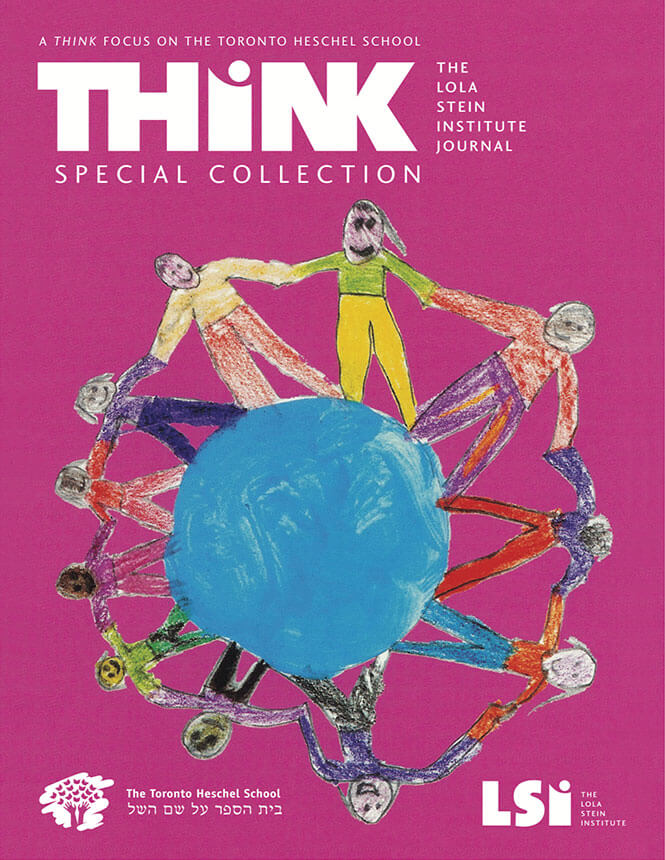 Everything Depends on the Teacher
Role Models, Please
Using Academic Disciplines to Teach Children How to Think
Education for the Next Generation
Double Commitment to the Individuality and Jewish Identity of Each Child
A Sustained Vision
Why Rabbi Abraham Joshua Heschel is Our Inspiration
A Thoughtful Jewish School