We Look Outward and We Look Inward:

We Look Outward and We Look Inward:

Why our Reform Family Chooses The Toronto Heschel School
by

We feel that our strong Reform Jewish family identity and The Toronto Heschel School’s strong pluralistic Jewish education complement one another perfectly.

We are the products of three generations of Reform rabbis and rebbitzins, Reform synagogue presidents and religious school teachers, Reform summer camp leaders, and youth group advisors.  But we are also the products of a pluralistic Jewish Day School (Yael’s Yavneh Day School in Cincinnati, Ohio) and a pluralistic synagogue (Adam’s “only show in town” shul in Danbury, Connecticut required its students to pray with the organ and choir on Friday nights and daven with the old men and their schnapps on Saturday mornings.)

It’s been said there are really only two kinds of Jews in the world – serious Jews and not-so-serious Jews.  Serious Jews do not compartmentalize their Judaism, do not limit it to certain times and occasions.  Rather they make Judaism a way of life, a way of thinking, a way of engaging with the world.  We are serious Jews, now doing our best to raise our children with the best of Reform Jewish values and practices.  We find The Toronto Heschel School to be a great partner in this great task.  Here are some of the reasons why.

For some two hundred years Reform Jews have aspired to meet modernity head-on, to engage with the world beyond the Jewish community while maintaining their particularistic allegiances to the Jewish people.  Yael’s grandfather, Rabbi Ernst Lorge (z”l) was a student and friend of Rabbi Heschel.  Both were rescued from Nazi Germany by Hebrew Union College, the Reform Rabbinical School.  Later they marched together in Selma and made social justice a pillar of their rabbinates.  The Toronto Heschel School does right by its namesake, modeling a living Judaism that faces outward to the wide world beyond the Jewish community, as well as inward to Klal Yisrael.

Reform Judaism has always put a high premium on inclusivity.  Girls and women were among the first to benefit, but the openness, which is one of the hallmarks of the Reform movement, is a far-reaching attitude, by which every individual and every idea is deserving of respectful consideration.  The Toronto Heschel School aspires to such openness.

As a rabbi (Yael) and a poet/professor of literature (Adam), we are students and teachers of text and the interpretation of text.  For better and worse, the Reform Jewish tradition allows for greater latitude than others when interpreting our sacred texts.  It is more willing to take some risks, to challenge and to be challenged by the texts.  We continue to be amazed at how the Toronto Heschel curriculum invites even the youngest students to engage with sacred texts in creative, disciplined, and sometimes playful ways.

The Splansky-Sol family is firmly planted within the Reform Jewish world – we’re at Holy Blossom Temple every Shabbat and Yom Tov, we’re at Camp George every summer.  We hope our boys will grow to be leaders within the NFTY youth movement as we were, and maybe even meet their besherts there as we did.  But beyond our appreciation for Reform Judaism’s principles is our love of Klal Yisrael.

Adam Sol teaches at Laurentian University’s campus in Barrie, Ontario. He is a parent at The Toronto Heschel School.

Rabbi Yael Splansky is a fourth-generation Reform rabbi, and currently serves as the Senior Rabbi at Holy Blossom Temple in Toronto. 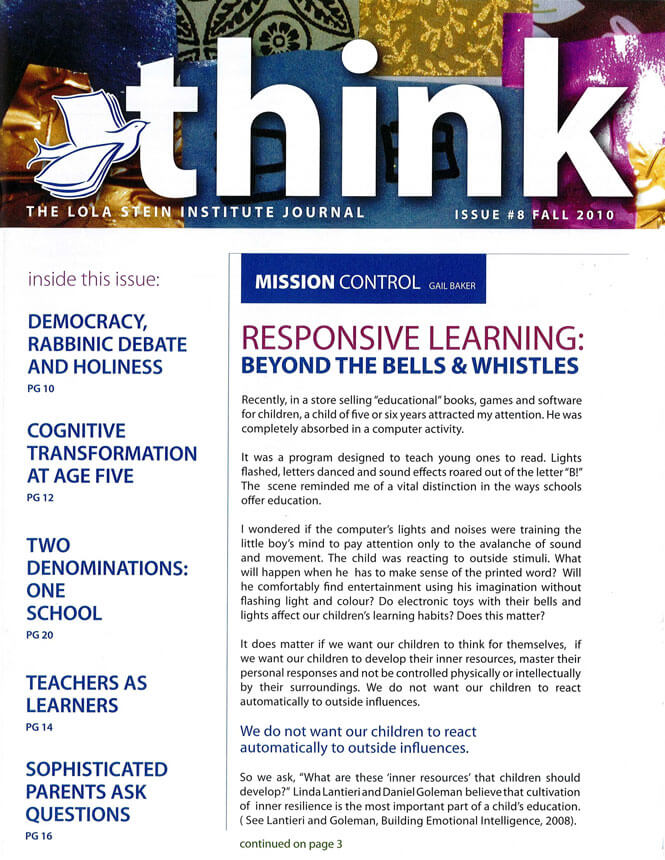 Cultivating Learning in the Teaching Garden