Legacy of an Inspired Teacher
by

A.J. Heschel crossed many boundaries and built many bridges.

Dreamgirls tells the story of the Supremes and their crossover from black music to mainstream.  Bob Dylan fused blue grass and folk, and Yo Yo Ma brought together European classical and Chinese music.  James Rudin has observed that Rabbi Abraham Joshua Heschel also was a “crossover phenomenon.”

The Background to his Artistry

Born into the Hasidic world of pre-World War I Warsaw, Heschel was related to nearly all the great Hasidic teachers of Eastern Europe.  He acknowledged, “I was very fortunate in having lived…in an environment where there were many people I could revere, people concerned with problems of inner life, of spirituality and integrity; people who have shown great compassion and understanding for other people.” We can see excerpts of this interview on YouTube.

Following a traditional rabbinic education, and encouraged by his mother, Heschel “crossed over” to study secular subjects in a Vilna high school, the progressive German rabbinical school, Hochschule for the Academic Study of Judaism.  Heschel went on to study philosophy, art history, and ancient Semitics at the University of Berlin.  His doctoral thesis fused biblical studies with philosophical phenomenology in a study of the prophetic consciousness.  He published in both academic and popular circles:  a book of Yiddish poetry, The Sacred Name:  Mentsch/Human, several studies in medieval Jewish philosophy, and books on Maimonides and Abravanel.

Heschel also taught at an institute for adult Jewish education, the Lehrhaus, founded by Martin Buber and Franz Rosenzweig.  He tried to demonstrate that the intellectual achievements of the greatest thinkers were linked to their inner, personal struggles.  He hoped to stimulate the spiritual lives of German Jews, offering support in their despair.

Heschel came to Cincinnati in 1940 as a Hebrew instructor at the Reform seminary.  In this radically different environment, Heschel learned English, maintained kashrut in a student dormitory, wrote some significant scholarly essays, and unsuccessfully tried to save family members from Hitler’s hatred.

Heschel was uncomfortable at Hebrew Union College, an institution which minimized Jewish law and tradition, and in 1945 he crossed again, this time to the Jewish Theological Seminar (JTS) in New York. While his interest in Jewish ethics and mysticism was often disparaged by the Seminary’s powerful Talmudists, Heschel earned international acclaim for his synthesis of traditional Jewish knowledge with the modern world.  The current Chancellor of JTS, Arnold Eisen, says that Rabbi Heschel saved Judaism for his generation.

I came to study at JTS because my academic interest in Jewish thought and my engagement in civil rights and anti-war activities found a “fit” with Rabbi Heschel.  One of his students, Professor Byron Sherwin of Spertus College in Chicago, encouraged me on this path.  I found Heschel to be a man of passionate religiosity.  His language was evocative and inspirational, and he had something important to say about Judaism and the world.

Out of the depths of the Jewish tradition, Heschel spoke to the issues that America faced in the late 1960s and early ’70s.  American Judaism was caught up in ethnic and communal concerns and Rabbi Heschel was speaking about God.  He influenced me and many other young rabbis and initiated a shift in the language of the pulpit as we gradually began to adjust our focus from Holocaust survival and Israel awareness to more God-talk and textual study.

Heschel taught me that Judaism must look at the details of halakhah in the larger picture of God’s world.  I once approached him with a halakhic question about spousal sexual relations and he responded by encouraging me to “celebrate your wife.”  He took my query from the details of Jewish law and placed it in the context of radical amazement.

I discovered that Rabbi Heschel had a sarcastic and playful sense of humour.  He chaired the admission committee, and noting my concern for social justice, tried to trip me up by asking, “Aren’t we taught to love our neighbour and not ourselves?”  I was taken aback thinking maybe I didn’t remember the biblical quote correctly.  (I remembered it as “to love our neighbour as ourselves.”)  Then I realized that Heschel was testing me; so I talked about the prophets’ passion for justice.  He had written about this and seemed to like my response.

The Intellectual and the Spiritual

Heschel transcended the boundary between intellectual and spiritual leadership.  He crossed through time wondering how teachers pas faced the same universal and Jewish challenges that vexed his own soul.  His articulation of these very human tensions prepared me for the process and content of the dilemmas I face.

By 1930 Heschel had already described Maimonides’ “inner wrestling,” and in the /40s, he wrote about Saadia Gaon’s search for self-understanding, saying, “We should not regard them as mirrors, reflecting other people’s problems, but rather as windows, allowing us to view the author’s soul.”  In his last work, Passion for Truth, Heschel describes his own struggle to balance the inclusive compassion of the founder of Hasidism, Yisrael Ball Shem Tov, with the elitist demand for integrity of Menachem Mendel of Kostsk, a later Hasidic master.  To this day, I still struggle with how to stand for the normative structure of traditional Judaism while opening up to welcome those on the periphery of Jewish life.

Heschel’s approach to spiritual teachings was radically new.  He made me see that the great teachers of Judaism were not academicians responding to textual questions disconnected from daily life.  They were living men facing real-life situations.  This personalization of the great thinkers of Judaism was an entirely original orientation.

Rabbi Heschel had had scholarly imagination and the rare capacity to link his immense erudition to life.  Discussing his book The Prophets, he observed, “The book changed my life.  Early in my life, my great love was for learning, studying, and the place where I preferred to live was my study, and books and writing and thinking.  I’ve learned from the prophets that I have to be involved in the affairs of man, in the affairs of suffering man.”

Heschel translated the prophets’ passion into decades of activism for social justice.  The lessons of Exodus were not for recall at Passover.  They were for real life.  Speaking about the struggle for civil rights in America, Heschel said, “It was far easier for the children of Israel to cross the Red Sea” than for blacks “to cross certain university campuses.”

In June 1963, Heschel sent a telegram to President Kennedy saying the quest for racial justice called for “moral grandeur and spiritual audacity.”  After a Friday phone call from Dr. Martin Luther King, Jr., Heschel flew Saturday night to join the march from Selma to Montgomery in Alabama.  He said, “I felt my legs were praying.”

With Elie Wiesel, one of his closest friends, Heschel was an early supporter of the movement to free Soviet Jewry.  As a co-founder of Clergy and Laity Concerned, he was also an early opponent of the Vietname War, angering many when he said that the war offered Americans the choice between “losing face or losing our souls.”

Heschel also crossed the schism between Jews and Christians.  During the Second Vatican Council in Rome (1962-1965) he flew secretly to meetings at the Vatican, nurturing the historic declaration that forever changed Catholic-Jewish relations; the Church no longer cited the goal to convert Jews to Christianity.

From Observance and Philosophy to Awe and Wonder

Heschel expanded the primary models for Jewish theological study.  he was not satisfied with historical accounts of what important Jewish thinkers had written about Judaism.  Nor did he interpret Judaism to follow existing models of philosophical or social thought. Instead, Rabbi Heschel drew deeply from Jewish sources, explored the human experience, and presented an alternative way of thinking about reality and religion.

In the 1950s, Heschel wrote three books:  Man is Not Alone, Man’s Quest for God, and God in Search of Man.  He wrote that religious thought was a unique way of thinking and should not be reduced to sociology, psychology, or philosophy.  He identified the categories of thought by which religion, in general, and Judaism, in particular, might understand itself “in terms of its own spirit.”  He said that authentic religion “begins as a breaking off, a going away.  It continues in acts of non-conformity to idolatry.”

Heschel called his approach “depth theology,” a search for wonder and radical self-amazement.  He sought to leave “religious behaviorism” behind, and find what preceded theological speculation and dogma.  He challenges us to “nurse the song in the recesses of the soul.”

In his great work on rabbinic theology, Heavenly Torah:  As Refracted Through the Generations, translated by Gordon Tucker, Heschel argues against a unitary model of Judaism.  He explores the tension in Jewish thought between the poetic, mystical approach of Rabbi Akiva and the rational, contextual method of Rabbi Yishmael.  He attributes the vibrancy of Judaism to this polarity, which he finds at the root of many efforts to comprehend reality and which reflects the dynamic difference between the infinite God and the finite human being.  He wrote, “Paradox is an essential way of understanding the world, history, and nature.  Strife, tension, contradiction characterize all of reality…There is a polarity in everything except God.  For all tension ends in God.  He is beyond all dichotomies.”

Heschel identifies three paths to God:  the Bible, with its midrashic record of revelation; the natural world, whose wonders lead to radical amazement; and sacred deeds, when “by doing the finite we attain the infinite.”  In the first two, God calls out to the human; in the latter, the human being responds to the call.  Heschel contends that our actions “must be carried out as variations on the theme of prayer”; that every mitzvah we do is “a prayer in the form of a deed.”  Prayer helps us see ourselves as witnesses of God; we then understand what it means to be “in the divine image” and we realize our true vocation in good deeds.

Heschel’s vivid evocative language opens the inner world of prayer, Shabbat, and the world of mitzvot for others to see.  His enduring legacy includes both the language of personal experience and the revival of God language.  He uncovered the link between religious belief and social concern.  Of all Rabbi Heschel’s teachings, what is most beloved to me is how he connected internal Jewish authenticity to contemporary life.

Our ancestor Abraham was called ivri, meaning the one who “crossed over,” from polytheism and Haran to monotheism and the land of Israel.  Rabbi Abraham Joshua Heschel was a contemporary crossover artist who came from pre-war Europe to speak to a post-Holocaust world.  His vision of Torah bridges the intellectual, social, and theological divides of contemporary society.  His mastery of classical philosophy and Kabbalah, Hasidic thought, and contemporary ethics, was linked to an esteem for the biblical prophets, a love for the State of Israel, and a reverence for all people.  Rabbi Heschel crossed many boundaries and built many bridges.

Rabbi Baruch Frydman-Kohl holds the Anne and Max Tanenbaum Chair in Rabbinics at Beth Tzedec Congregation. He was a student of Rabbi Heschel. He has been senior rabbi at Beth Tzedec since 1993. 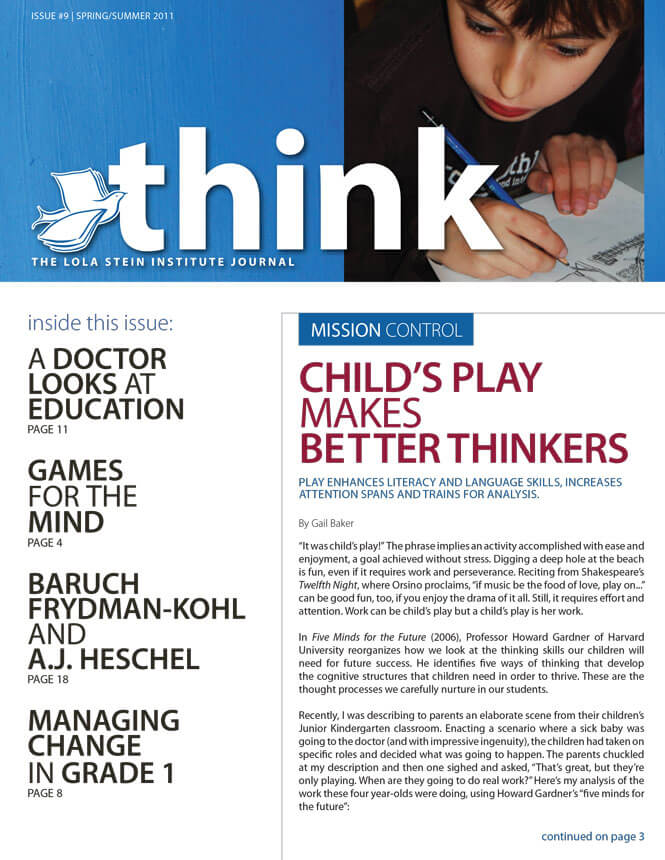