What a waste of time! That’s awesome!
One Hebrew expression means both.

Experienced Jewish educators know that bringing middle-school students to express themselves in Hebrew can be a big challenge.  Equally demanding is the task to connect young Canadian teenagers to Israel; for many of them, Israel is just an idea or a set of picture postcards. Is it a “waste of time” to try?  Or are there ways to bring Israel education and Hebrew together in an “awesome” way for our students?  I am happy to share one way we have been successful in doing this.

For the past few years I have been involved in the development and implementation of a unique approach to teaching Hebrew in middle school.  Our strategy has been to bring students to an authentic understanding of the richness and complexity of Israeli culture, history, and contemporary issues. The premise is that students deserve to understand the State of Israel as more than an idealized vision of kibbutzim and blue-and-white flags. They also deserve to see Israel as more than a locus of television news about politics, war, and attacks – a place to fear.

Teaching Israel through the arts is one very effective way to provide a rich and multi-sensory learning experience; it engages students at both cognitive and emotional levels. Art forms such as drama, film, and lyric-rich music deliver a strong linguistic impression and are particularly advantageous when it comes to learning about Israel through the Hebrew language.

In our Grade 7 curriculum, we have chosen two films – Ushpizin and Hakayitz Shel Aviya – to bring Israeli culture and history into a Canadian classroom.  Ushpizin takes our students into the world of Hasidic Jews in Jerusalem during the festival of Sukkot with a humorous and empathetic view into the spiritual struggle of the main characters, Moshe and Mati.  Hakayitz Shel Aviya explores the experience of living in Israel in the 1950s through the eyes of a young girl; students contemplate this pivotal time in Israeli history when Holocaust survivor families struggled to integrate into a new society.

Recognizing that watching a film in a foreign language is a challenge, we nonetheless declined the subtitled versions and instead transcribed the films.  We fix the students’ attention on the Hebrew language even as they enjoy the story; students watch the film and read along with a Hebrew script.  We provide a vocabulary list with key words and explain complex expressions in simple Hebrew.

The most captivating element in the language-learning process seems to be the idiomatic expressions that come up in almost every scene.  Students really enjoy the added fun of Hebrew phrases such as ashkarah? (really?), tizrom (go with it), and ani lo omed be ze yoter (I can’t take it anymore). I knew the approach was successful when I overheard a student discussing a recent math test with her friend.  When asked how it went, without skipping a beat and with the appropriate expression she replied “Al Hapanim!” (horrible!) (meaning literally “flat on its face.”)  The friend replied, “Na’avor gam et zeh!” (This too will pass!).

We want our students to speak Hebrew a lot at school.  We create exercises for grammar and vocabulary development from words and common language structures found in the film scripts.  We develop drama games and improvisational exercises using the idiomatic expressions that they so enjoy.  We encourage Hebrew speaking in as many situations as we can.  It all leads to more conversation.

As our students learn about Israeli culture and history, they become primed to question Israel’s social and political dilemmas.  Engagement deepens.  In Grade 8, we introduce topics through the well-known Israeli pop song “Shirat Hastiker” (The Sticker Song).  The son is a mash-up (combination) of slogans that appear on bumper stickers, lamp posts, and bus stops throughout Israel.  Each sticker has its own back story.

Performed by the popular Israeli band Hadag Nachash, “The Sticker Song” and video open a fascinating entry for middle-school students to study four key topics in contemporary Israel:  Yitzhak Rabin and the Oslo Peace Accord; Ariel Sharon and the disengagement from Gaza; tensions between chilonim and dati’im (secular and religious); and the Palestinian-Israeli conflict.

One well known sticker “Chaver atah chaser” (Friend, you are missed) refers to Yitzhak Rabin, the Israeli Prime Minister who was assassinated for his involvement in the Oslo Peace Accord.  We present a variety of resource materials so students can understand the circumstances that inspired each sticker.  For example, regarding Rabin and the Oslo Accord, students watch a newsreel summary of the history: they get a sense of Israel’s shock at the assassination of Rabin and see a video of the speech at Rabin’s funeral given by his granddaughter, Noa Ben Artzi Rothman.  The resource materials are in Hebrew, again with our written Hebrew transcripts and vocabulary guides.   The students want to understand the real story and so they do.

Learning this way incites conversation; students have opinions and strong feelings about the topics at issue.  There is always a reason to speak in class and because these deeply felt opinions must be expressed in Hebrew in class, our students speak a great deal of Hebrew!  The conversations continue into the hallway – always a sign of success.

Through videos, newsreels, songs, and other forms of pop culture, students learn more than just the facts.  They get a feel for the complexity and nuances of Israel today and they can better imagine what it might be like to live there.  Israeli film and pop music are the media through which we deliver the message of Israel and its language.  Teaching Hebrew our way is definitely no “waste of time.”  It is truly “awesome.”  As the Hebrew expression says:  chaval al hazman!

Edna Sharet is the Director of Junior High at The Toronto Heschel School. 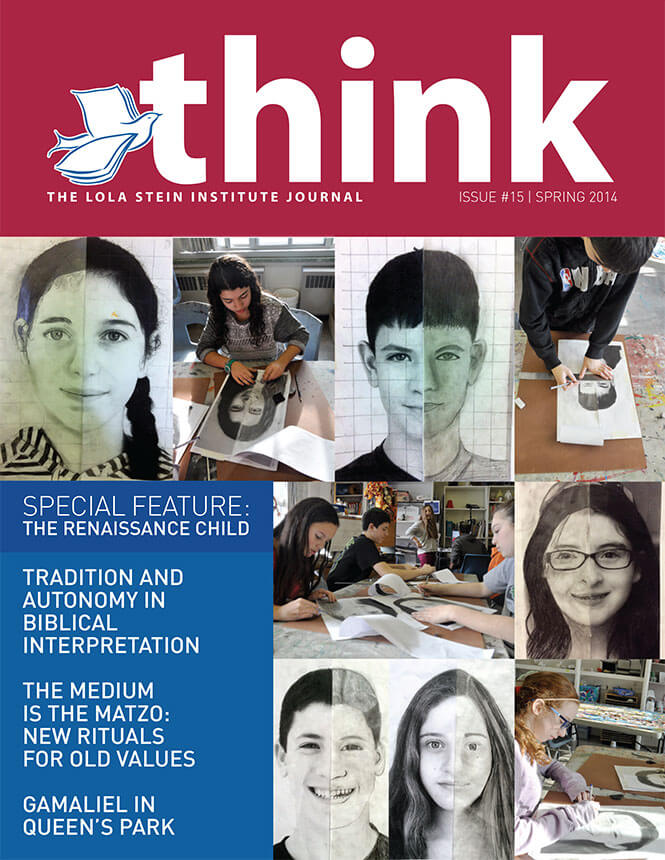