We are two friends. From the moment we were given the opportunity to spend 12 days in the American Deep South learning about past and present Civil Rights struggles, we knew this was a journey we wanted to take together. It seemed a natural and fascinating continuation of our 10 years at The Toronto Heschel School. Maybe, with the other Jewish high school students on our trip, we would help figure out the future of the Civil Rights movement and what our part in it might be. In any case, we wanted to see it for ourselves, and together.

One July day in New Orleans we met up with other Jewish students from around North America to begin our journey. From enjoying the beignets to visiting the Second World War museum, the first couple of days felt like a blaze of new experiences. The heat, the food, and the city – it was all a positive culture shock, making the experience immediately memorable and unique.

Driving to Jackson, Mississippi, we visited two old plantations that have been turned in to museums and historic tourist attractions. They presented the history very differently. The Whitney Plantation in Wallace, Louisiana, focused intensely on slaves’ experiences and daily lives. Walking through the site in 35-degree heat left little to the imagination, while the abandoned buildings and shabby workers’ living quarters were blatant reminders of the horror of American slavery. The second plantation, Longwood Plantation in Natchez, Mississippi, seemed almost wary of speaking about slavery. It had been the estate of a very rich landowner who had built a magnificent house, and the tour focused more on the history of this particular wealthy family. While we learned a lot about the family’s history and experiences, we couldn’t help but wonder about the other residents on that land. We saw how history is in the hands of its storytellers. These different takes on the same time period made us wonder about how we learn and tell our own story.

Our journey continued in Selma, Alabama, where Rabbi A.J. Heschel had marched alongside Dr. Martin Luther King Jr. As Toronto Heschel School alumni, we know this story as well as we know our math or Chumash. In Selma, we spoke with a woman who had been a student leader at the time and took part in the march. She told us about the emotions and power of the march and how important Rabbi Heschel’s involvement had been. She showed us where he slept. What we had imagined came to life.

In Birmingham, we stood on the stairs of the 16th Street Baptist Church in the exact location of the tragic bombing in 1963. We tried to understand and visualize what life was like in the most segregated town in the United States. We felt inspired and intrigued to journey from the roots or the Civil Rights movement to the issues and dilemmas of the present day.

We experienced more upbeat activities in Mississippi. The Grammy Museum in Cleveland was incredible and the B.B. King Museum in Indianola was equally fun. We enjoyed the long bus rides, the R&B music, and, of course, delicious Southern food. Many interesting conversations emerged among our group, and we explored neighbourhoods and towns during our free time.

While travelling on through Mississippi, we met with leaders from the American Civil Liberties Union (ACLU) and delved into the problems of free speech. We sat with criminal justice lawyers from the Emmet Till lnterpretive Center and spoke about those who are wrongly incarcerated. Lawyers at the Equal Justice Institute told us about child incarceration, and we learned about the past and present work of the Southern Law Poverty Center. We were inspired by these leaders who are dedicating their lives to bringing justice to people whose lives have become marginalized.

In Greenwood, our last stop in Mississippi, we visited the Institute of Southern Jewish Life where we discovered the unique way that Jewish life evolved in the South, and we discussed our shared narratives within this Jewish American story. On Shabbat we lead discussions and services at Ahavath Rayim, the only Jewish congregation in the city; the sole members were four generations of one family, including one Holocaust survivor.

As soon as the trip began, we knew how fortunate we were to have attended The Toronto Heschel School.  We found that our knowledge was deep and extensive on the subject of civil rights; part of who we have become as Jews is to stand up for civil rights and feel a sense of ownership in this advocacy work. The entire trip was reminiscent of a Grade 8 culminating project at Toronto Heschel, for which we wrote and presented a human rights speech that was based in both Talmudic and international law.

We are determined as Jews, and as global and Canadian citizens, to use the best of our traditions to make a positive difference in this world. Rabbi Heschel felt his legs were praying when he physically marched, and spiritually supported, the Civil Rights struggle in the United States. Since our Grade 5 year at Toronto Heschel, we have been challenged to explore how we will pray with our legs and effect change, both as a group and as individuals.  We take the lessons of this trip back with us to high school in Toronto. More than ever before, we are determined to stand up physically and spiritually for justice and for those in need.

Avishai Sol and Max Abrahams graduated from The Toronto Heschel School and were Grade 11 students at the time they wrote this article. 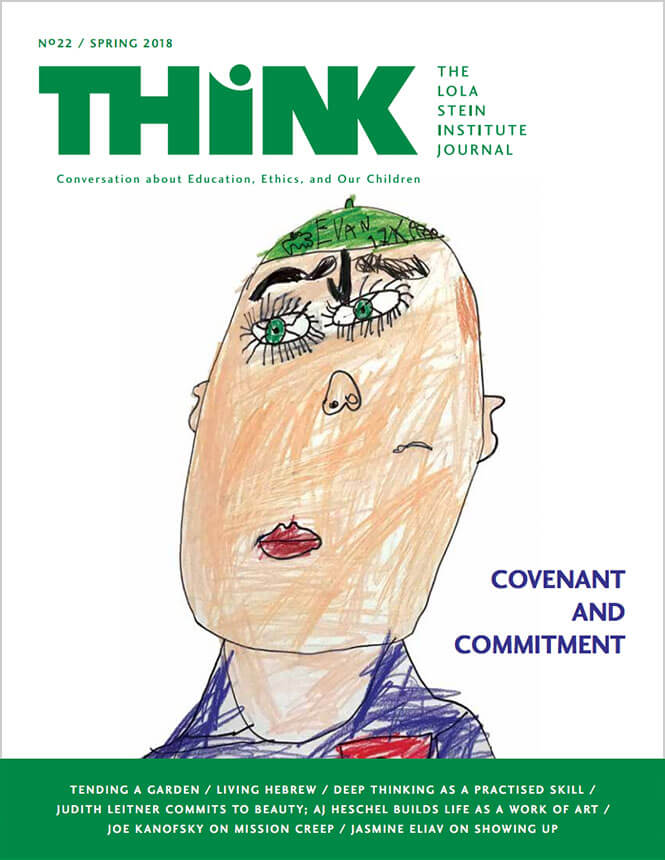 The Bounty of a School Garden
Living Hebrew

The Choices We Make
Live and Learn