Evolution of the Aleph

Evolution of the Aleph

The alphabet is one of the most fundamental inventions in human communication.  It enables the preservation and clear understanding of people’s thoughts and allows human experiences to be shared.  Through the alphabet’s earliest evolution from pictures and shapes to sounds, it integrated ancient oral and visual cultures and propelled the art of listening towards the arts of reading and writing.  For many scholars of anthropology and history, entire civilizations were founded upon this astonishing innovation.

The Hebrew alphabet is called the Aleph Bet.  It is a codified system of 22 letters that evolved throughout the ancient Near East over a period of about 900 years.  One compelling theory alleges that the Aleph Bet began its linguistic journey as Egyptian hieroglyphics, pictograms endowed with symbolic meanings.  Gradually the pictures’ shapes shifted and changed into written signs or characters, called phonograms, each expressing a specific sound.

By about 1500 B.C.E., Proto-Sinaitic had emerged as a west-Semitic script.  It then developed into Proto-Canaanite or Old Hebrew, whose main offshoots were the Phoenecian, Ancient Hebrew, and Aramaic alphabetical systems around 1000 B.C.E.  These alphabets eventually became the ancestors of the Roman alphabet we use today.

In a wonderful Grade 5 project, “The Evolution of the Aleph,” we render the Hebrew alphabet visible as an abundant linguistic, historical, and Judaic springboard for student learning.  We designed this integrative visual arts curriculum asking ourselves the essential Toronto Heschel School question:  How can we foster a rich intersection of thinking, knowledge, art, and ethical behaviour in this learning experience?

This visual arts exploration takes place concurrent to the Grade 5 civilizations curriculum, entitled “The Force of Human Innovation.”  The latter brings students to ponder the questions:  What need did a specific invention address in ancient societies and cultures?  What structures were in place that let artful specialists give shape to important novel concepts?  What resources were available to the inventors?  Who used the inventions?  How were they disseminated and adapted throughout time and in distant place?  Today, as cutting-edge creations circulate at lightening-speed, we wonder how these ancient inventions and innovations transformed civilizations?

The Aleph Bet study fits in as an ancient innovation that transformed society.  We guide our students to become thinkers and to wonder how we can understand the ways that speech can be preserved, noted down, and transmitted.  We look into the creative process underlying the art of writing:  how did writing evolve from spoken word, to image, to sound, and to an ordered alphabetic system?  Our process with the students has two phases:  exploration and creation.

As scholars of the ancient world, our students first investigate the evolution of the different letters of the Aleph Bet from a historical and linguistic perspective.  We examine the social, cultural, and religious needs addressed by the invention of the art of writing in ancient Near Eastern civilizations.  We analyze the Aleph Bet’s visual vocabulary, the pictures and their symbolism, and its roots in Egyptian hieroglyphics.  We study the Hebrew letters’ linguistic trajectories and the conventions that propelled them from shapes to sounds, and eventually, to a set of interrelated signs.

As Judaic scholars we wonder how we can imagine and contemplate our biblical ancestors and the complexities of their lives and times.  We consider their ongoing relationship with ancient Egypt and correlate the development of the Aleph Bet.  We explore the profound impact that the creation of the Aleph Bet had upon modes of communication in the ancient Near East and, ultimately, upon the development of our Judaic heritage

As artists, we wonder how we can imagine and explore the creative mindset of the innovators who artfully propelled the evolution of writing from shape to sound.  To do this we first evaluate the evolution of the Aleph Bet from a design perspective.  We study the fundamental elements and principles of design and their application to poster art.  Students research the art and craft of the poster and use models made by artists from Cuba.  We revisit the art and craft of oil paste/watercolour to add texture to our artwork.

We also take time to think about the art of typology, and the importance of engaging with each letter’s formal qualities.  We meet the individual persona of the 22 Hebrew letters, treating each as a separate graphic symbol with its own design history and cultural legacy.  Each study artist chooses a Hebrew letter whose evolution speaks to his/her heart, and designs a poster that graphically tracks the evolving stages of that specific letter, including an original drawing of the object that became the hieroglyph.

We divide up our canvas into seven sections – one for each stage in a Hebrew letter’s development, and we embed design elements and principles in our creative choices.  As a final step, the students each write an Artist’s Statement that describes their artwork and creative choices, illuminates their artistic challenges, and contemplates the question:  What do I know now that I did not know before, now that I have made art?  The collective work is then exhibited in The Toronto Heschel School’s hallways, as is our artful practice.

As an artists’ collective, we are ever mindful of ethical behaviour in the art room, Derech Eretz.  We look to the ways that we share our ideas; we respect our learning space (public and private), and our art materials and resources; and we reflect on fellow artists’ thinking and working styles.

As we teach and reflect upon what we learn in “The Evolution of the Aleph,” we continue to pose the questions that are core to The Toronto Heschel School’s way:  How can we encourage the connection of knowledge, logic, and beauty?  Are we evoking visual delight and conceptual fascination?  And, most importantly, are our learners experiencing a sense of awe and wonder as they engage in this lyrical visual interpretation – this Midrash?

Judith Leitner co-founded The Toronto Heschel School in 1996 and since then has served as the Director of Arts, team-designing and teaching the integrative Judaic arts curriculum.  In 1991 she founded the Integrated Arts Programme at She’arim Hebrew Day School.  Judith is equally passionate about documentary photography; her recent exhibitions include “Serene Passage:  A Traveller’s Prayer at Ground Zero, Madrid and Shanghai” (Arta Gallery 2011 and Darchei Noam 2014); “My Voice, Through My Lense” (MaRS Discovery District, June 2014), and “Embedded:  Personal Identity through Job:19” (Contact Photography Festival 2015).

PREVIOUS ARTICLE
We Know Who We Are 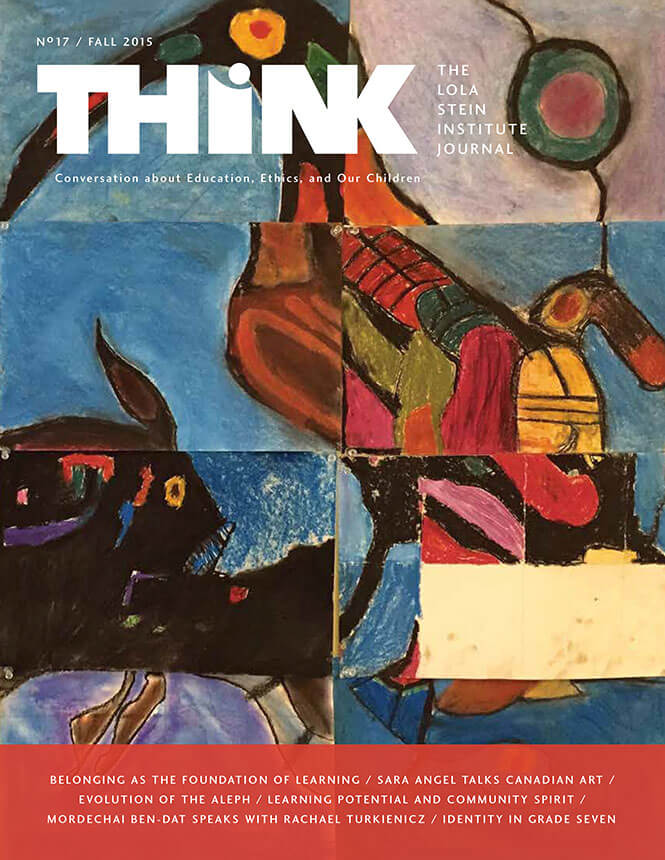 Evolution of the Aleph
An Alumna Speaks to Junior High Graduates, June 2015
We Know Who We Are
Browse Issues Index