Heidi Friedman mentors her team to bridge ideas and opportunities that would otherwise remain separate. The Learning Centre is where senior educators at The Toronto Heschel School mentor their colleagues to continually refine their craft; a school program is only as good as its teachers.

Integrative teaching is one advanced technique that is honed and polished. It offers students new and complex understandings through a purposeful curation of diverse elements; it is a specialized skill at the crux of The Toronto Heschel School’s approach to education.1 As an adjective, “integrative” implies unifying separate things, and as the verb “to integrate,” it refers to combining one thing with another so they become a unified whole.

While its components—including interdisciplinary study, big ideas, learning through the arts, whole child approach, blending Jewish and universal studies—are each talked about enthusiastically in university faculties and at professional conferences, they have not been taught in combination as an integrated pedagogy. Therefore, most Toronto Heschel teachers receive coaching specifically in integrative skills, such as big-picture and lateral thinking, the management of exploration and experimentation, the facility to exploit language skills strategically, and peer-to-peer and classroom collaboration.

Heidi Friedman, the school’s Director of Early Years and Child Study, mentors teachers in integrative teaching. Her technique of choice is to model an iterative process, working through lesson plans to be sure of three things:

1. Topics must connect across disciplines artfully and synergistically,

2. Students’ social and emotional learning must remain in focus, and

3. There is symbiosis between curriculum and child study.

For instance, one Senior Kindergarten theme that is used to coordinate and integrate the children’s lesson is set as “Communication happens in many ways; if we listen and watch carefully, we learn about relationships and interactions.” The children learn the phenomenon of communication by studying it in different contexts:

a. In their science class, communication appears as reciprocal relationships in nature, as when a plant’s lack of water causes it to wilt or a tree’s thirst draws up the water it requires. There is an interaction of physical ask and answer.

b. In their Chumash class, communication occurs in desert dialogues between God and the Israelites (B’nei Yisrael) and Moshe; again, there are asks and answers.

c. In their language arts class, students articulate their thoughts in a Writers’ Workshop; they write, then reconsider and reconfigure their words until a reader comprehends their ideas with accuracy.

One anecdote she provided helped me see what Friedman meant by the integration of curriculum with child study. A very young student repeatedly said “no!” whenever teachers or classmates invited him to play, work, or share. It was causing the obvious obstructions and upsets to the young student himself as well as to the class as a whole. Friedman explained to her team that the preferred response was to engage this social and emotional challenge through the language of communication that the class was learning in other contexts. In a group discussion the teacher could ask the class, “What do you think Jon was really communicating when he said ‘no, no, no’ to Jill’s request? What did he mean? How else could he have said what he was feeling?” Pairing the children’s learning about communication with a hurdle to peace in the class was enlightening to all. Friedman and her teacher group carefully discussed how to manage this kind of conversation among very young children, which itself would require a very thoughtful conversation in class. As a mentor, Friedman was folding many considerations into the mix.

Friedman also coaches for “performances of understanding.” These are opportunities for the children to physically demonstrate what they have learned. It helps students internalize their learning by requiring it to be expressed. For example, in the Jewish tradition the first of the Hebrew month Adar is a day of fun and silliness, with hints of Purim to come. In many Jewish schools children dress up, parade, and sing about Adar and happiness. Freidman asked the Early Years team to seize on the First of Adar as a possible moment for “performance of understanding” of the thematic learning underway in each class. The following emerged:

1. The Junior Kindergarten children were studying feelings; so the students dressed up as silly joyful clowns and painted their faces.  Learning that Rosh Chodesh Adar is a time to make everyone “feel” happy, they put this into action, dancing as clowns and spreading joy around the school.

2. The Senior Kindergarten class was exploring numbers and their Rosh Chodesh Adar costumes reflected either a number or quantity.  A child could dress as a basket of eight apples or as the two tablets of the Ten Commandments.  Another could wear a giant number three or pin tiny numerals all over her clothes.

3. Grade 1 was engaged with the theme “The Hidden and the Revealed,” which included a science study requiring the students to track the phases of the moon at home each night.  The children could dress up either as the phase of the moon that would appear on their Hebrew birthday, or they could make and wear a mask whose outside face would depict how much of themselves they revealed to the world, while the inside would illustrate the unseen aspects of their persona.

Through my conversations in the Learning Centre I could see how detailed and intentional the teachers have to be in the way they approach integrative learning.  It is demanding work, more complicated than traditional pedagogies, and requires thoughtful cultivation and practise.  For me it is beyond impressive to see Friedman mentoring her team to bridge ideas and opportunities that would otherwise remain separate.  What becomes clear is the group’s passion to deepen learning for their very young students and to increase its meaning in these early lives.  I could also see in the many anecdotes and examples that the children love to learn, which makes sense, and it is so apparent that their teachers love to teach them. 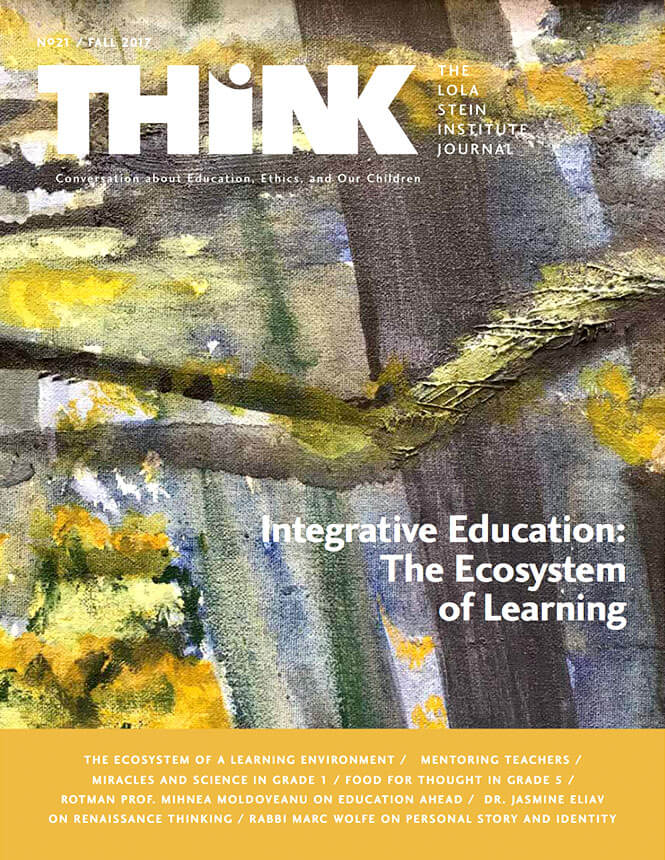 The 21st Century Renaissance Thinker
Chaos and Order
Narrative and Identity
Who Tells Your Story? Who Tells Ours?
Re-Designing Formative Education on the Eve of the Fourth Industrial Revolution
Transcendental Learning
Browse Issues Index