Democracy and Justice in the Junior High Classroom
by

The summer of 2014 saw a social media phenomenon called the “Ice Bucket Challenge,” which encouraged individuals to douse themselves with a bucket of ice water and post a video of the process online. The purpose was to raise awareness and funds for a neurodegenerative disease known as ALS. Hundreds of thousands of people accepted the challenge and donations to ALS organizations skyrocketed.

The Ice Bucket Challenge was a brilliant initiative that generated funds for a worthy cause. Nonetheless, critics soon popped up denouncing the challenge as digital “slacktivism.” They called it armchair engagement in social justice that imparts little understanding of the cause at its heart.

I began to consider what the critics of slacktivism are battling, and I believe they are simply against jumping on bandwagons. They decry the lack of agency among participants of challenges, like the Ice Bucket, and point out that viral campaigns create followers instead of thinkers.

I began to wonder whether slacktivism might be at play in our schools. Do we plant the seeds of slacktivism when we ask youngsters to bring in a can of soup for the homeless when they never see its beneficiaries? Is slacktivism at work when Junior High students sign petitions to support causes they don’t fully understand?

My questions grew larger: Can we motivate youth to make meaningful decisions to support the welfare of others? How do children develop empathy and a sense of responsibility? How do we help them notice social needs based on their own moral sensibilities, and how do we inspire them to create innovative solutions? Can students cultivate a sense of social responsibility not because they are tweaked externally by their screens and peers, but because deep inside they want to help?

In junior high civics at Toronto Heschel, we consciously nurture empathetic global citizens over a period of years. My students learn to notice their community’s needs and to search for answers, just as the Ice Bucket Challenge founders did so well. We know that students’ inspiration and innovation emerge from their own experiences, their natural sense of justice, and their morality. My job is to foment concern and motivation.

According to the celebrated psychologist Lawrence Kohlberg, children’s morality and sense of justice develop as they grow. As small children, their sense of right and wrong is entirely self-motivated; as young adults, they do what others think they should do. Ultimately they mature to recognize that a greater social good is worthwhile, despite one’s own feelings or attachments.

Kohlberg found that children who are immersed in “democratic” educational environments – where they assume responsibility for decision-making and engage in shared, agreed-upon ethical practices – fare much better in their moral development than children who do not engage in these ways at school. The environments cannot be where children simply learn about democracy or justice; they must be where the children themselves participate meaningfully in democratic processes.1

Our Junior High civics curriculum features a weekly class devoted to producing social justice results that the students generate themselves. We follow Kohlberg’s rubric and begin “up close and personal” before moving outward. Each classroom project must resonate with each age group; the students must be able to empathize with the cause at hand and identify with the possibility for social action.

Year by year, our students engage in projects of broadening scope. Grade 5 students learn what responsible informed decision-making looks like and how democracy functions in their classroom, city, province, and country. The Grade 6 class creates an environmental project that benefits their school community, which for Heschel kids is a familiar cause to champion. Grade 7 students branch into the local and even international Jewish community, while the Grade 8 initiative is grounded in universal identity. The graduating class project encompasses the global community as students study human rights and pursue plans to protect them.

Our civics projects differ from the Ice Bucket Challenge because a sense of personal agency is embedded in each effort. As the children practise how to express an opinion without judgment and how not to put words in others’ mouths, mutual respect blossoms and opportunities for exciting, socially valuable projects emerge. I have witnessed classes refrain from an important vote because one classmate is absent, and students work painstakingly to incorporate others’ suggestions in their own proposals.

Our students deliberate and vote on the decisions that relate to their initiatives. They engage in the thoughtful planning that real-world problems demand and determine the content, pace, and direction of the work. They feel empowered. Year by year, our students come to understand what it means to be a catalyst and a leader. Annually the junior high civics classes implement feasible projects that contribute authentically to the greater social good.

As students define the process and content of their own social justice experience, their commitment to the cause becomes deep and real. I see the growth of empathy in the depths of their understanding of why they are proposing certain projects and for whose benefit. Slacktivism is written out of the equation when the children’s own voices and moral convictions matter.

Maybe slacktivism gets a bad name because it’s so easy. It does not take much to click “Like” on Facebook or post a video to social media. However, I’m thinking that if we continue to teach students the social value and personal reward of active participation, – in their peer groups, at school, or online– then perhaps, as they become citizens with full legal rights and responsibilities, deeper and concerted acts of social justice will become as second nature as clicking the “Like” button.

Lesley Cohen received her teaching degree at OISE (UofT), and also holds a B.A. in Psychology and an M.A. in Religion and Cultural Studies.  She teaches Grade 6 and Junior High music at The Toronto Heschel School.

NEXT ARTICLE
Life Lessons and the Art of Portraiture 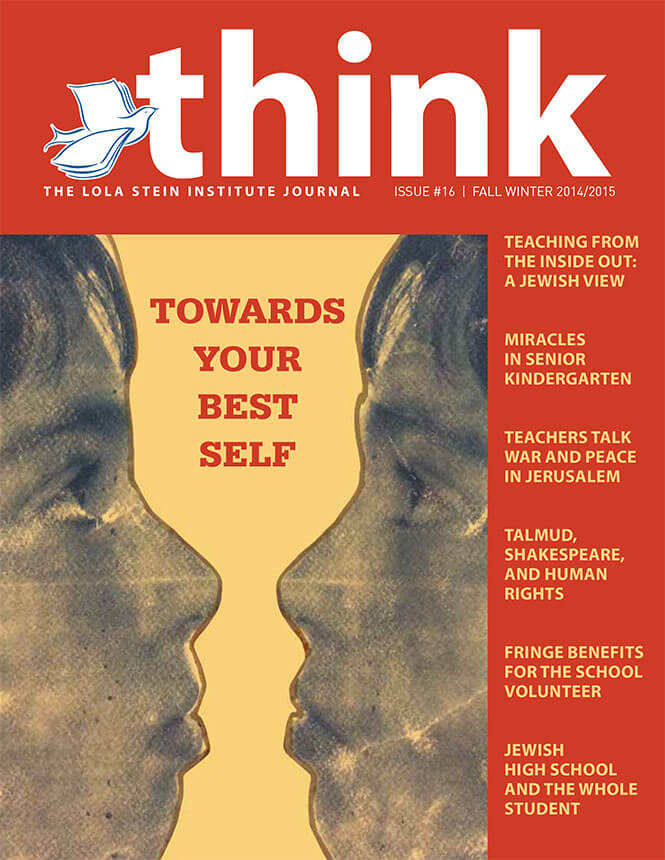