Our Meet the Community blog column gives Heschel families the opportunity to get to know some of the people who make a difference at The Toronto Heschel School.

This month’s edition features Dvora Goodman, who is a parent of a 2020 alumnus and children currently enrolled in grades 3 and 8 at Heschel.  As the Coordinator for the Lola Stein Institute, Dvora also plays an integral role in getting THINK Magazine published twice per year and into the hands of the community. 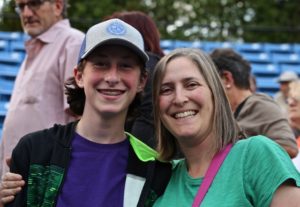 Heschel Hive (HH):  Hello, Dvora.  How long have you been a Heschel parent, and when did you join the Lola Stein Institute?

Dvora Goodman (DG): We moved back to Toronto in 2012 and two of my kids started Heschel in JK and Grade 1 that fall.  I think I started with the Lola Stein Institute around 2014.

HH: Where did you move from?

DG: We lived in the Boston area.  I went there for graduate school and stayed for a job, and then another job.  When my oldest was going into Grade 1 we felt like it’s now or never, we have to come back.

HH: What were you doing in graduate school?

DG: I did a Master’s degree in Jewish Professional Leadership, which really just means doing a lot of work in Jewish community!  I focused on the education side of things.  I used to run Jewish summer programs for high school students in Boston.

HH: Can you tell us a little bit about the Lola Stein Institute and its relationship to The Toronto Heschel School?

DG: The Lola Stein Institute is sort of the “think tank” of The Toronto Heschel School, where we think and write a lot about Jewish education as is happening at the school.  THINK Magazine is an attempt to write articles and engage people with ideas about the kind of education that is provided at The Toronto Heschel School, and to use Heschel as the laboratory for these things happening. We consider how can we highlight what’s going on in the school in these articles.

It’s really hard to explain because what on earth is a think tank?  My son said to me you’re a think tank, you think a lot, right?  We are thinking and having conversations all the time about things that are relevant in Jewish education, and then some of those ideas get taken to the school and implemented.

We also think about how to showcase the kind of education that’s happening at The Toronto Heschel School and how to explain what we’re trying to do here, both to the internal parent and staff community and also externally.

HH: What are your responsibilities as Coordinator?

DG: I do whatever needs to get done!  I do some writing for THINK Magazine and I take care of any logistics that need to happen around it.  I am the only paid employee who works strictly at Lola Stein.

HH: Is this a full-time role?

DG: I work part-time. I’m an independent educator, so I guess it is about a day a week, sometimes more, sometimes less.

HH: How many articles have you written for THINK, over the years?

DG: I think it’s around 15 that I’ve written or collaborated on. I have generally written one to two articles in each issue that I’ve been involved with.  For some of them, I will interview a teacher and then write up what that teacher said; those articles are more their thoughts, my writing. 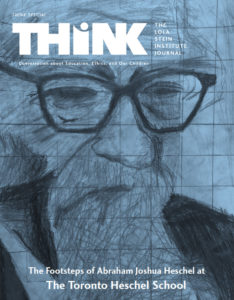 HH: Can you point to one or two articles from THINK that you really admire and tell us why?

DG: The issue that just came out is a focus on AJ Heschel and why his words, thoughts, and philosophy matter to our children.  The reason I really admire it and like what we did with it is that it’s a reminder about why I chose the school for my kids in the first place.  Heschel was a brilliant man who had a lot of thoughts and ideas, and the school has brought those ideas to life.  I’m excited for the community to know more about what those are and why it matters.

HH: What type of impact do you think that THINK Magazine has had on the Heschel community, and the Jewish community at large? 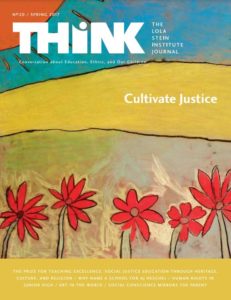 DG: I first saw THINK Magazine when I lived in Boston.  My mom used to save it for me when she got it with the Canadian Jewish News and would give it to me when she saw me.  I thought, WOW, this is a school that is writing not just about what they are doing, because all schools write about what they are doing, but this is a school that writes and is thinking about education and Jewish education. I think that the people who read THINK Magazine really appreciate the ideas that we bring forward and the connectedness to feeling ‘wow, this is actually playing out in real life somewhere,’ and ‘wow, there are kids who are actually benefiting from this,’ but I think that we’re also contributing to the conversation around Jewish education in general in North America.

For Heschel parents, I hope it’s a chance to see not just what our kids are doing in the classroom, but why they’re doing what they’re doing in the classroom.  As parents, we get weekly curriculum updates that they’re learning X, but we don’t always get why are they learning X and how is it connected to Y.  THINK Magazine does that for me, as a parent.

HH: What have been the greatest highlights of the Heschel program for you as a parent, and for your kids?

DG: The first thing that comes to mind is JK and SK at Heschel – I adore it, I miss it tremendously now that my youngest is in Grade 3. There is something so special about the learning and the fun of learning and the Jewish everything that they do in those grades, which I love.  Another highlight, on the other end of the spectrum, is that I have a daughter now in Junior High.  I think that the way that the kids come to see it as the place where they belong, because they’re learning that their voices matter, and the teachers are really forming relationships with them that develop over time, challenging and supporting them in every way.  I think my daughter would say is her highlight is Grade 8, which may be the best year for her.

Other highlights I love include the Grade 3 study of indigenous people and the Grade 5 Living Haggadah in its entirety.  Those are some of my personal favourites. 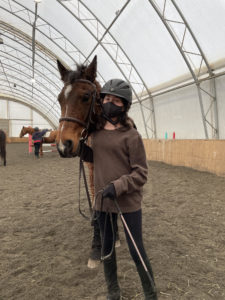 HH: What do you like to do in your spare time?

DG: Spare time? (laugh) I love going up north every Sunday with my daughter and watching her ride horses, sitting up in nature and being out by the barn and seeing these creatures that are just so gentle and lovely. We do this through four seasons, but they’ll cancel if it’s colder than -12°C.

HH: If you could live in any country, which country would you pick?

DG: I always thought I wanted to live in Israel.  It was a country that I visited a lot when I was a kid, but it’s not where I want to live right now.  I lived in the United States for 13 years, and it was really great and I loved it in so many ways, but I’m thankful almost every day that I don’t live in the US. I think I’m just really happy in Canada right now.  In general, I think it’s a pretty good place to be.  I have two siblings in the US, so I go to visit, but I really like coming back home.

HH: Thanks very much for your time and thoughts, Dvora!  We can’t wait to read the new THINK Special Collection: The Footsteps of Abraham Joshua Heschel at The Toronto Heschel School.

You can also read one of Dvora’s recent articles for THINK Magazine, ‘Turn It Over and Over for All Is in It: There Really Is No Same Old Story,’ HERE (pages 10-11).