As part of Heschel’s commitment to Israel engagement and education, we are proud to welcome two new UJA ShinShinim to our school. Ma’ayan Gordon and Semyon Steklov are Heschel’s ninth pair of Israeli teen emissaries, who volunteer for one year to bring Israel to our community. We spoke with them to learn more about their stories and the exciting year ahead.

Q: Are you originally from Israel?

“We were both born outside of Israel.” Ma’ayan is originally from Toronto. When she was three years old, her family moved to Binyamina in the northern Israeli district of Haifa. Semyon’s family also made Aliyah, moving from Samara, Russia, when he was six years old, to Bat Yam, on the Mediterranean Sea, south of Tel Aviv.

Q: What inspired your families to make Aliyah?

Q: Where is one place in Israel you think everyone should visit?

There can’t be just one place—there are so many to see! “Definitely Jerusalem, which is a special place for everyone,” and Beit Jann, a Druze village in northern Israel. It has a spectacular lookout where there are panoramic views of Israel, sea to sea, with the confluence of the Mediterranean and Lake Kinneret.

For lookouts, everyone should also visit the Eliat Mountains in southern Israel. On a clear day, you can see four countries: Israel, Saudi Arabia, Jordan, and Egypt. Israelis love to drive to lookouts; we bring our coffee sets and sip coffee while taking in the beautiful view!

Israelis are equally passionate about refreshing springs. There are numerous throughout the country, but our favourites are Ein Moda in Emek Hama’ayanot, northern Israel, which has crystal clear water, and the springs of the Nahal Kziv nature reserve, also in the north, which are infused with ancient history and have an abundance of fish.

And don’t forget the beaches! Visitors should check out Rosh HaNikra beach, also in northern Israel, which has stunning sunsets, and Semyon’s hometown of Bat Yam, which has some of the best beaches in the country, including Bat Yam Beach, HaSela Beach, and Jerusalem Beach.

To experience Israel’s lush agriculture, including jasmine, visit Ma’ayan’s hometown of Binyamina, which also has beautiful beaches and world-renowned wineries.

Q: What made you interested in the ShinShinim program?

The ShinShinim program fulfills Ma’ayan’s love of travel, but with a special purpose. “As ShinShinim, we have an important job to share our love of Israel and represent it in the ways we feel it should be represented.”

Semyon’s interest in the ShinShinim program also stems from his commitment to Israel and wish to share this attachment with others. At home, Semyon is involved in the Israeli youth movement, which has taught him how to guide others and speak confidently. “It is very important to me to share these skills with Jewish people abroad by teaching them about Israeli culture.”

Q: What will you be doing at Heschel and what do you hope to accomplish?

Ma’ayan and Semyon will be working with Heschel students of all grades on various Israeli-themed projects. “Our aim is to bring our Israel to Heschel students—the side we know and love.” In doing so, they aim to deepen regard for Israel as a source of beauty, vitality, and creativity for the Jewish people.

Q: What do you like best about Toronto so far?

Baseball games! “Last week, we went to see the Toronto Blue Jays play. They won the game and the energy in the Rogers Centre was epic! We also visited the Toronto Islands, which was a great experience in seeing the sprawl of the city from a distance. We can’t wait to go back later in the season to see all of the fall colours, and we also look forward to playing in the snow with Heschel students!”

Q: Do you have any hobbies or hidden talents?

Both ShinShinim love music; Semyon plays guitar and Ma’ayan sings. She also loves theatre as much as Semyon loves sports, and makes world-class challahs using her own special recipe. But it’s top secret, so she can’t say anymore!

You can gain greater insight into Semyon and Ma’ayan’s musical talents by watching this video they recorded to introduce themselves to the Heschel community. You can also follow them on Instagram @hcshinshinim.

We are thrilled to have them with us for the 2021/22 school year and we can’t wait to see all of the wonderful work they do in bringing Israel to our community! 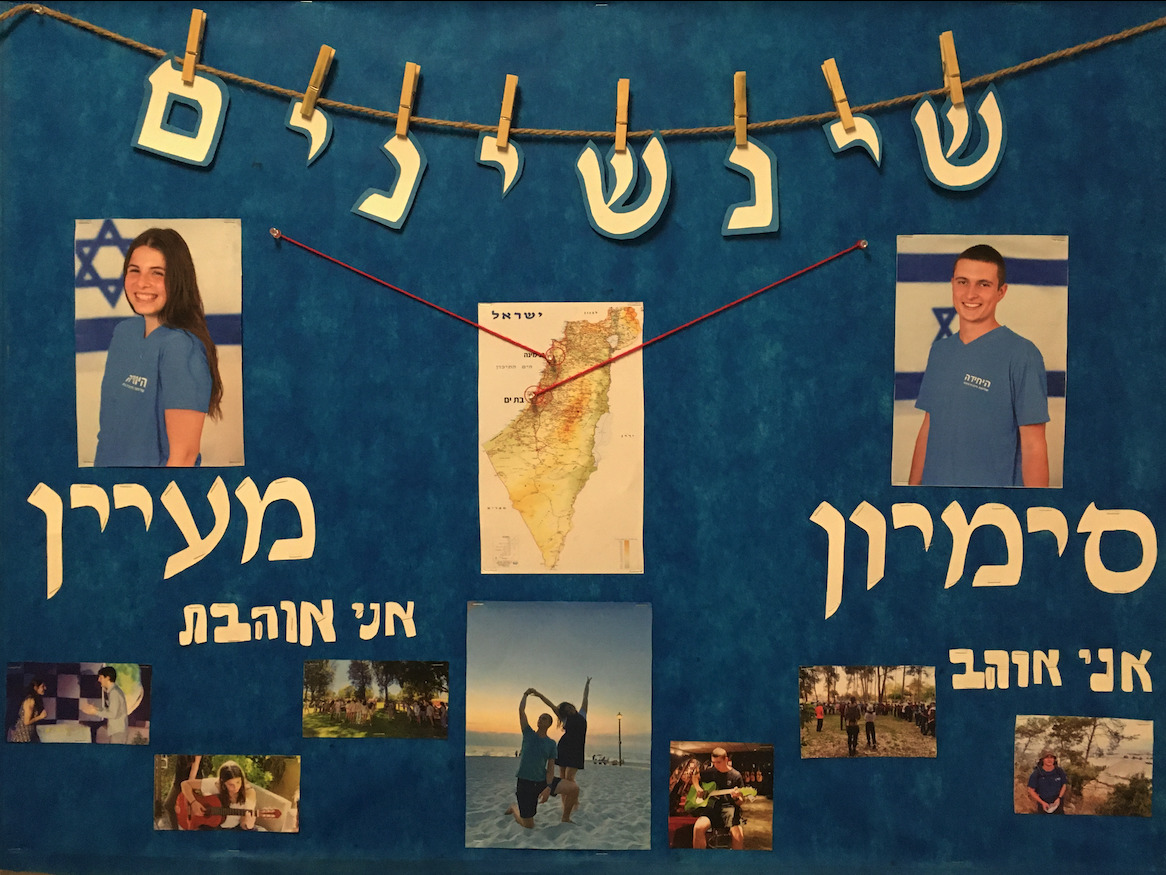 NEXT ARTICLE
Reflections on Elul